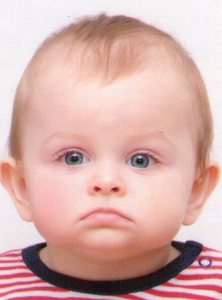 Here’s yet another experience to be filed in the kooky folder of “it can only happen to me”. Yes, along with being accosted by a little old Greek lady demanding I hand over her bus fare, or the toothless man sporting the small dog in his baby carrier strapped to his chest, who informed me he knew me from a street corner in the city (don’t fret dear readers, apparently I used to get the 9 – 5 magazine from him. About 5 times. At least 18 months ago. Yes I am that memorable it seems). I now have another encounter to add to this burgeoning directory of eccentric experiences.

Sitting in the Dr’s waiting room this morning, an elderly man approached me and proceeded to unfurl himself into the chair next to mine. Now, this was of course not the oddity (although there was a plentiful amount of spare seats littering the small room), more so it was when he pulled out a book which proclaimed parents can make their child a genius in their first year of life, that started to concern me.

So for the next painful 10 minutes I had to feign interest in his ideologies, from which, according to his lore, was the only way my son would get along in the world. I was to read it and employ its many doctrines to enable my son to be assured of future success. Some pearls of wisdom it included were; one shouldn’t teach your child to count these days. And make sure you send your child to school with fluent readings skills as teachers don’t have time to perform such a feat anymore. He blames multiculturalism… I swear if he had pulled out a white mask and burning cross next, I would not have been surprised!

The kicker is, that once Harrison turns 6, that is it, game over people. No more meaningful education can take root in their now barren brains. Interested in learning anther language later in life Harrison? No dice sorry, according to this man and his fancy pants book. BUT, if I take the time to teach him before this age, he has the capabilities to pick up 5 new languages. Silly me, here I have been concentrating on teaching him just the one, English… Perhaps we should master it before I start peppering his vocabulary with French and Italian nouns? Oui?

« Take The Pressure Down
Thank God for Grandparents – part 2! »