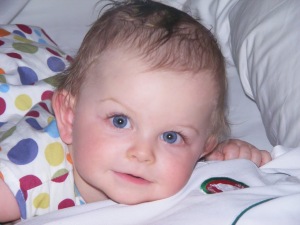 Yes, just like the Moon Landing, which celebrated a special anniversary not so long ago, we too have experienced a momentous occasion on par with such ground breaking histrionics – our baby boy has taken his fist steps!

Ok, so slight exaggeration in importance comparison perhaps, but we certainly feel equal adulation and excitement at this milestone feat. I’m not sure there is a greater landmark moment on the developmental calendar for a child, as to taking their first tentative steps. Indeed crawling was not met with as much exaltation (although maybe that was just me, as I saw my serenity at home being virtually shattered) and nor did I greatly encouraged it as I was instead looking forward to the oh so cute “sitting up” phase where bubs are happily propped up with various toys splayed within reach, and contentedly so they sit, quite at ease with not being able to move. We seemed to skip that step instead for crawling at just before 7 months of age. And Hurricane Harrison has not stopped discovering all sorts of mischief since!

Walking though, this is another matter. We have actively encouraged it, making a game out of this exercise, as we know how much our little guy laps up positive reinforcement and relishes the praise bestowed upon him. He thinks he is talent itself and even gives himself a little round of applause to congratulate his cleverness. 6 steps in total have been achieved so far and while he was yesterday quite happy to attempt to continually break his personal best, he has woken today without quite so much enthusiasm for his new skill. Poor Nanny & Poppy who called on Skype to watch their precious grandson strut his stuff, barely managed to string together 2 steps. Oh well, cant guarantee toddlers (which he is officially a member of the club now!) to perform on cue.

We do realise that life is about to leap into dangerous territory. The days of the other 50% of our household goods being safely out of reach are now numbered and we will no doubt do battle trying to get him to gladly travel in the pram these days, when he realises he has two perfectly good (albeit slow) legs on which to take him where he needs to go.

So if we didn’t know it before, we soon will REALLY know we are alive! This one small step for Harrison will be sure to translate in to much mischief making ahead.

« The Viral Vicious Cycle
Temptation thy name is… anything that is NOT meant to be touched! »