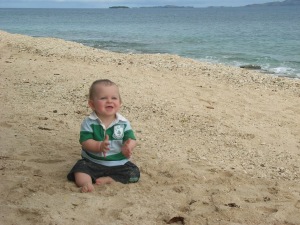 I’ve noticed personal space has become a thing of the past since producing a baby. And for someone who is quite protective of her own little individual realm, it’s been quite the learning curve!

Call it too long living in the city, but I have grown accustomed to NOT chatting to complete strangers, or making small talk with people in the supermarket/ doctors/trains…. The list goes on! I’m well used to walking with my eyes averted, focused only on the direction we’re headed, and wont offer a glance in the peripherary unless its related to incoming danger. Jaded, most likely, but I imagine, just far to familiar with the trait of keeping to oneself….

So you can imagine my surprise at having people wanting to talk, to interact, to even know personal details, when it comes to me and my child. Pushing a pram appears to be akin to sporting a neon sign that states I am available for a chat and no subject matter should be off limits! Yes, part of me does find it heart warming when people take the time to coo in Harrison’s direction and tell me how gorgeous my son is (you aren’t preaching to the converted people, I am his Mum, I am OF COURSE going to agree with this!) and I have no beef with them rolling off the generic questions of age etc, but its when they want to dispense advise about eating, sleeping, feeding, and how mothers who don’t breastfeed are basically setting their child up for a lifetime of insignificance and failure that I tend to get a bit aggressive. Or when a mother launches in to her own tale of survival in the early days of motherhood, complete with sagas dedicated to her stints with depression, fights with the now ex-boyfriend and rounds it all up with a not so brief history of her new lover who she met through facebook etc, etc, you can see why I’d sometime prefer to just be left alone. And this was all just in a queue at Centrelink trying to lodge a form for the Baby Bonus when my child was but 2 weeks old!

I don’t, however, mind old little old ladies pulling up alongside me for a chinwag (as happened yesterday in the Doctors waiting room) because they remind me of my Nans and I seem to have a soft spot for them. I recall early on there would be some confusion as to whether it was a boy or girl they were fussing over but I hope it was more something to do with failing eyesight as I have never suspected my son look anything like a little girl…

Come to think of it, it all started while my son was in utero. Seems even just being pregnant will get the opinionaters out in force. I used to have to virtually plan a military precision operation in the mornings when I was with child because there of a surly man who caught the same train as I into the City, who insisted on sitting next to me and sounding off about his 2 year old daughter and how difficult it is being a Dad, getting decent childcare, dealing with lack of sleep and privacy… Oh yes, all that a 7 month pregnant first time mother wants to hear, to be sure…!

I should also note I AM more than happy to share my personal space with my son. I knew early on this was all a part of the parenting agreement and have no issues with being the human hankie/jumping castle/climbing gym because well, to put it plainly, I love him. Cant really say the same for the complete strangers who sidle up to us seemingly out of nowhere and commence sprouting their often well meaning, but not asked for, opinions.

And yes, yes, I know, most people are just being NICE, but like I say, I live in a city where this sort of thing just doesn’t happen when you don’t have a child by your side. And having lived in the Capital of All Things Impersonal in London, I can’t help but have inadvertently adapted this supposedly unfriendly trait. I’ll always be polite, but please, people, remember what your own mothers told you – if you don’t have anything nice to say, then don’t say anything at all!

« Absense makes the heart grow fonder
The Best of Times, The Worst of Times »