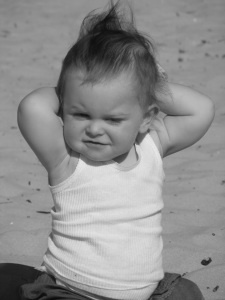 We’ve done it…! Survived our first year playing parents to Harrison that is. At times I thought we might be lucky to survive the night, after some of those early, horrendous sleepless ones (ie, his VERY first night home from hospital where a total of 45 minutes sleep was recorded in about 13 hours!) but here we are, almost smug with ourselves as we reflect, one year on at the magical milestone as our bubba transitions from baby to toddler.

I’m not sure what my favourite moment could be pinned down as… It’s a bit like trying to pick a favourite parent or sibling – a bit morally wrong!

His first words (bub bub bub) were very special, aged almost 7 months – and some times I do not think he has stopped talking since! The repertoire sure has grown since then – the favourites at present all share an unfortunately similar theme. There is the very insistent “no no no no NO”, the demanding “Don’t. Stop” or bosyy “don’t touch” (wonder where he got those from???). But then there is the one that makes my heart melt: “Mummy!”. Walking through the door Wednesday night I was greeted by my beautiful boy who turned to me excitedly and almost squealed it in delight… Made me dissolve instantly into a big squishy blob of love!

Crawling was another major milestone that crept up on us unawares but the jury is still out as to whether this was a favourite moment or not… I had NOT been encouraging this feat AT ALL. Bad mother material? Probably. But I knew instinctively that the moment my son was let loose with free reign of movement, my life (and my house and my worldly possessions in it) would never be the same (or safe!) again. Not even seven months old and he started moving around with reckless abandon. And oh, then there is his crawling style which has caused much laughter accompanied by shrieks of shock. Bum pointing directly up in the air, like a shiny signalling beacon, legs straight as pins, he looked something similar to a caveman getting about the place. I get so used to his unique style that I momentarily wonder why people are laughing at my son…. Then I click and remember his oh so strange (but individual!) style of getting from Point A to Point B.

I won’t lie – I often reflect that I lived most of my early months in a complete fog, far removed from the real world and didn’t take to parenthood as breezily as you assume beforehand that you will (and that, it appears, most other people seem to do!). Perhaps its because we don’t have doting grandparents living close by, offering help on tap like some do, or perhaps it was just because of the totally traumatic birth and after effects that made our start rocky. Maybe its because having a baby seems to make you (well, me) extremely vague… But the main point to make is, WE GOT there, and are all the more stronger, prouder, wider (and tireder) for it.

The first smile, the first giggle, the first recognition that he gave that I was his Mummy and he loved me unconditionally (not judging that I couldn’t breastfeed, not caring that I sometimes got it wrong, and certainly not critiquing my skills as a new mother) made the tough times melt away and leave me with precious memories of my most beautiful little man.

So, to my sweet little Harrison, happy first birthday!! We are so blessed to have you as our baby boy, and have no doubt you will continue to bring us much love and joy as the second year of life rolls on. Toddler-hood, here we come!