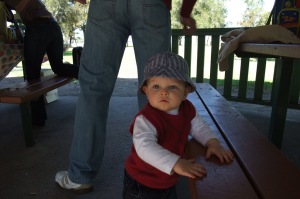 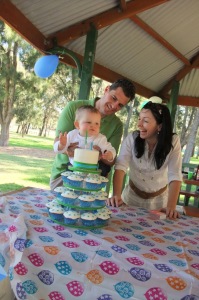 I see now why birthdays are only an annual event.

Besides the fact they signal you losing yet another year of your life in a busy blur, but, as I have discovered this past few weeks, when a child’s party is involved, the energy you require to pull off the event successfully takes about a year to replenish again!

The planning prior to the party is enough to drain your energy reserves and then you still need to show up and give it your all! Finally, after the festivities are finished, you need to dig deep and seek out some long lost liveliness to embark on the clean-up. Hence, we are now spent…financially and emotionally!!!

Just look at the simple fact that its taken me a week to write this blog entry… Not to mention the small mucus-y matter surrounding my boy picking up two nasty bugs and taking ill. Funny that he is only aged one and already guilty of over indulging and partying a little too hard at his “do”, resulting in taking sick leave the following week!

But the most important thing, all tiredness and illness aside, is my boy enjoyed an absolutely awesome first birthday. Not that he’ll remember it sure (that’s what this blog is for!) but I’ll never forget the look of pure glee plastered across his cherubic little face, the whole day long. Whether he was being pushed about on his big cousins trike, happily gorging himself on a vast array of usually unavailable “naughty” foods”, or playing with his little friends, he was never without a smile on his face…. Oh, except for the nasty tumble he took trying to negotiate a speedy exit from the shelter en route to chase a ball…

But as the old saying (and song) goes, its his party and if he wants to sob a little, then so be it!

And the blessings just continued (and no, I’m not referring to the mound of gifts he (we) gratefully received)… The weather Gods smiled down on us, drenching the park in a deliciously warm winter sun. Everyone who rsvp’d actually attended, and appeared to enjoy themselves. Our various pockets of people we know all intermingled with ease, and, besides the birthday boy, the other absolute star of the show was the beautiful 4 day old Mason whose brilliant mother, my big Sis, didn’t bat an eyelid about dragging her acutely newborn bub out for the day. What a champ (both of them!). When Harrison was that age I hadn’t even ventured out the front door, let alone into a park full of people!

I think we’ll be implementing a rule of sorts that we only subject ourselves to party planning every second year, because I think by then I might be recovered enough to consider another one!