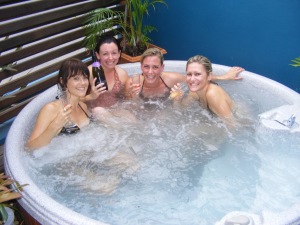 Yesterday I did the unfathomable; I indulged in a day devoted entirely to myself. A Donna Day.

Mothers the world over would no doubt be divided into 2 camps over this issue – shock at such blatant shirking of parental duties, or sheer envy at the luxurious thought. But I argue, don’t we all deserve a day devoid of responsibilities? I think yes!

Okay, so it was hard to switch off, and the lingering guilt never completely abated, but my God, at the very same time, it was bloody nice to relax for once! And I mean reeeeeelllllaaaaax! I treated myself to a long overdue facial (which happened to be heaven itself, if you are interested), returned overdue social phone calls and hired a long sought after DVD (Edward Cullen, sigh…). And hard as it was, I resisted all temptation to tend to the piled high washing, ignored the still half unpacked suitcase, and turned a big blind eye to the various assortments of mess that were still left scattered from my child’s play the day before. Not an easy task for this reformed neat freak to do!

Blissful as it was, I noticed I couldn’t help but peek at the clock and think about my boy and wonder how his day was faring. As he was FAR from happy about being left at Daycare that day! 3 phone calls in the 6 and a half hours did do a lot to ease the remorse though! There is also the fact I actually got a chance to rest up and rid myself of my cold – something I NEVER get to do. So while my brain was still slightly admonishing such indulgence, my body (and my restored health!) is at least thanking me.

So I say to any mother reading this, TAKE TIME OUT WHEN YOU CAN! Its as rare as a precious gem you stumble across in a garage sale so if the opportunity presents itself, grab it with both hands and banish any guilt from your mind. After all, who knows when such a time may show itself again????

« The Cold War
The Curious Case of Catnapper Harrison »