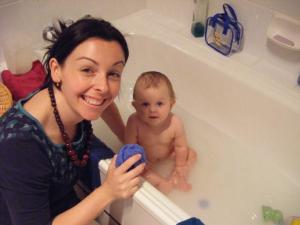 We’ve had a crap related catastrophe of epic proportions today. I can’t believe I am about to type this but… I think my son may have sampled some of his own poo. Cue mortified screech!
Now I can’t be sure, but from my frantic angle at the time, it was a close call. Let me explain how the poo pandemonium came to be, before you call DOCS on me.
Its Saturday evening, and Harrison and I are home alone after the husband has gone to footy. My son, during his dinner, has emitted some serious grunting and groaning, which was not the surprising feat. Oh no, it was more after the fact, as I scooped him out of his high chair and felt a distinctly wet patch against my clothes that I remembered he wasn’t wearing one of his more foolproof Nappies. Mistake Number 1.
Mistake number 2 was made some time before, when holidaying in Fiji. Whilst allowing 41 nappies for a 6 day holiday should have been an ample supply, it of course proved to be none too many for my serially soiling son. Fast forward to the last day and I am forced to make a fleeing trip to 5 different shops to purchase some Huggies to get us home. Unfortunately for me, only a flimsy variety were on offer, and in the interest of getting value for money, I have been using them at the end of each day when I can always guarantee no nappy will last on my son for more than 2 hours. Mistake number 3.
So there I was, home alone, trying to run an emergency early bath for my son, and keep him sitting in a safe spot. Cue Mistake Number 4…. In the madness of trying to juggle the act of getting the bath run, the towels ready, his pj’s out, not to mention the stack of wipes I knew I’d be needing to clean up the offending mess, Harrison Houdini escaped and proceeded to toddle off down the hall towards me. No problem, only that he stopped suddenly and turned ever so slightly, in a manner which made me nervous. Something had caught Mr Curious’s eye. And before I could lunge and scream “NOOOOOOOOOOO” he’d picked up a perfectly rounded teeny pebble of poo and proceeded to pop it into his mouth. AAARRRGGGHHHH!
My hand swooped in and swooshed the offending particle out, but I suppose I cant be sure if I got it all, God forbid. He did screw up his face, as if to say, Hmmmm, this isn’t Mum’s cooking…. Which is a good thing I gather, otherwise if it tasted the same as the meals I lovingly made for him, I’d give up and turn to the pre-packaged variety! But it was then, in the distance I saw another, larger suspicious specimen which had somehow also escaped the confines of his feeble Fijian nappy. Diving in a manner which would do a Baseball player racing for the Home Plate proud, I pounced before he discovered it as well, thus avoiding Mistake Number 5 being born.
Then to the mammoth task of cleaning up the kid. It was EVERYWHERE. I barely knew whether to just toss out the clothes or attempt a clean up. In the interests of his limited wardrobe I responsibly chose the latter. After all, I am totally impervious to poo, so cleaning it up hasn’t been too bad. Its just trying scrape it off your son’s flailing feet, and seeing it land in every which direction on the nappy change table which can be a bit disconcerting.
I think The Husband jinxed us as he left for the football today. He jokingly warned his son not to poo in the bath (a habit Harrison has grown accustomed too, for some reason, when its just he and I here). Little did we know the crap catastrophe was going to be of far greater proportions!!!
Now then, if you will excuse me, I think I have earned myself half a block of Cadbury’s and a glass or 2 of wine…