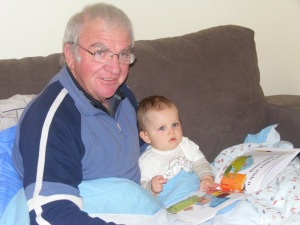 My son is suffering from acute attention withdrawals today – and all because he is missing his beloved Nanny & Poppy.

Having had their devoted and undivided attention since Sunday, Harrison is wandering around a little lost without someone there to scoop him up and snuggle with him at any given moment, or to just simply sit and play endlessly, as he loves. Unfortunately Mummy doesn’t have the time to do just that all day long and even if I did, it wouldn’t matter. He is looking for his Grandparents to fulfil this desire as only they can.

For example, my overly energetic son always struggles to sit still for the entire reading of a children’s book. So you can imagine my surprise when I walked in the door the other afternoon to find Harrison and his Poppy snuggled up on the lounge under a doona, book in hand and Harrison’s unbroken concentration snared. Maybe it’s the fact I read out loud the correct story as printed where as Poppy tends towards constructing his own hilarious versions to match the pictures on the page (most of which cannot be repeated and thankfully none of which my son will understand!) that garnered his attention so successfully? Or perhaps it’s just that they continually lavish loads of love and attention upon him, like when his Nanny makes funny faces that he cries with laughter at, and then spends the rest of the day trying to copy.

This morning, it nearly broke my heart, watching him in the first bleary-eyed moments after he woke from his nap. He stared straight past me down the hallway, little head crooked to the side, big blue eyes gazing expectantly. But no one else came… And he just sat, with that cute little face cocked to the side in anticipation, waiting to see who would follow, because for the last few days his waking had been met with almost carnival atmosphere!

I guess we are both a little lost, truth be told. There always seems to be a huge gaping hole in our world when the grandparents have vacated. Not having the luxury of having them live close by means that visits are met with mountains of excitement, but departures dredge up such sadness in us both that we seem to spend the first part of the adjustment period individually moping about the place.

I think for me too, having them here means I can get a million times more tasks achieved in a day than when its just Harrison and I home alone, him hanging off my leg like a koala clinging to a swinging tree limb whilst I try to move around the kitchen or lounge room with the aim of getting things done. Not an easy feat, I assure you!

Its not all bad, they are just down the road at my sisters for 2 more days, so we can get our fix again tomorrow and Saturday. Because having one happy little Harrison equals one merry Mummy!