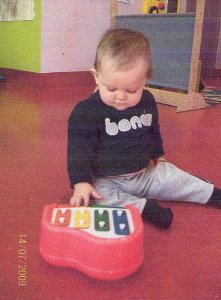 Day two of Daycare has dawned, and the highly anticipated tears finally arrived. Not a flood, mind you, as originally expected, but enough for the Mother Guilt to momentarily kick in. Oh and there was the subsequent attempt by Harrison to claw his way up my leg with the intention of being cuddled and (I strongly suspect) carried back out to the car. Not fun for this Mummy, no, but at least I know he does prefer my company after all! Was a tad concerned after yesterday’s valiant display of the stiff upper lip…

Thankfully the fantastic carers on hand swooped in and sorted the situation, as only they could. Cue distraction in the shape of yesterdays favourite toy, and all sobs subsided nicely. And to complete the separation sequence nicely, with the mere mention of morning tea he was willing to be wrenched from my arms and seated happily, awaiting the arrival of food.

But back to Day One briefly – we received a lovely page of photos of Harrison interacting and playing nicely (no evidence of any child being clocked by his lightning speed “Helicopter Harry” hands, thank Goodness!) and report card recounting his “great first morning”. It also reeled off a list of achievements and host of friends names. Phew, our money is not going to waste!

As a reward we are spiriting him away to sunny Queensland for 6 days. Well, that and the fact his Daddy has to go for work and Mummy wants to celebrate Al’s 30th and see 3 of her fave gals! So he will have 144 hours of my undivided attention to make up for the two mornings of missing Mummy!